I have a web API on a server which talks to a DC (via LDAP) on an Azure VM and I have been connecting to it remotely no problem.

Remotely, I connect to xxx.cloudapp.net. The DC shows as xxx.dev.local in ADUC.

So using "LDP" locally, we see: 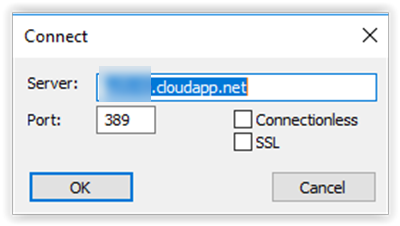 and then we bind: 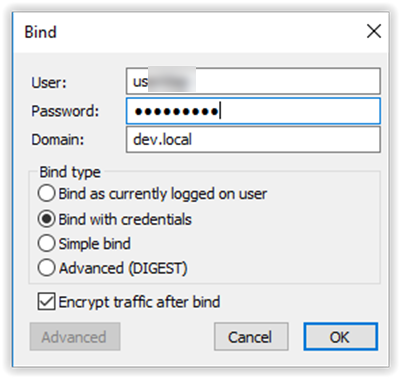 Now I can try any combination I like. I can leave out the domain name, just use "dev", ... Nothing works.

This works remotely i.e. use "xxx.cloudapp.net" as the LDAP address and login as dev/userxxx.

So what if I try the "dev.local" address? 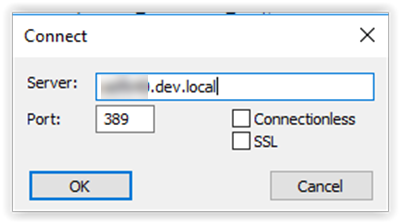 The connect works. Now for the Bind. 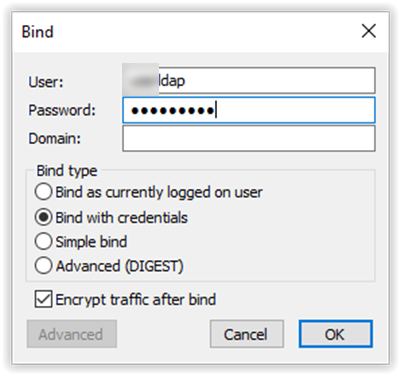 This works! But only if I leave the domain blank.

I'm not a DC / LDAP guru so can't explain this but hopefully this will help someone stuck on the same issue.

ADFS : Moving the "Active Directory" IDP entry to the top of the list

This post shows how to rename the "Active Directory" IDP and at the bottom of the post is a comment around "move Active Directory to Top" and some script.

This script assumes a set number of IDP and looking at the script, it seems to move the names but not the URL i.e. if you had two IDP viz. IDP A and "Active Directory", it would swop the names around but clicking "Active Directory" would in fact navigate to IDP A.

Also, there are other considerations as mentioned by @Jorge in a reply:

"The list of IdPs in general is dynamic as you may add or remove an IdP. The code should take that into account.

In addition, per RP trust you can also specify a list of IdP that are allowed to use that RP trust and that list is a subset of the overall list of IdPs. Again, the code should take that into account.

It should not matter how long the IdP list is.

Is it possible to make this dynamic where the logic is something like:

* if more than 1 IdP is listed and the AD IdP is included, then move that IdP to the top."

I needed to move this entry to the top.

I would not have got this to work without having the ability to debug.

This is the script I came up with:


I move the elements around in the DOM as per this.

This inserts one node before the other.

You get the parent of the node. You then call the insertBefore method on the parent and you pass it the idp[lastElement] node (the "Active Directory" IDP  one) and tell it you want it inserted before idp[0] (the first one). This then swops their order.

This seems to work across all the requirements.

I've done a number of posts around the customisation but the hard part is that I could not debug the JavaScript in onload.js.

Then I came across JSFiddle.

This allows you to input your HTML, your css and your JavaScript and then run the script and see the result.

The screen is divided into four segments:

I'm playing around with the order of the HRD IDP so this post concentrates on that functionality.

In a browser, navigate to the HRD screen and then view the source.

section into the HTML.

Obviously, what HTML you select depends on what you are trying to achieve. 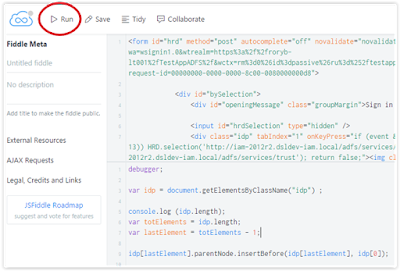 The results will show in the Results section.

Perfect - so now I can play around and see the result. This is far easier than going through the whole theme / upload etc. procedure. 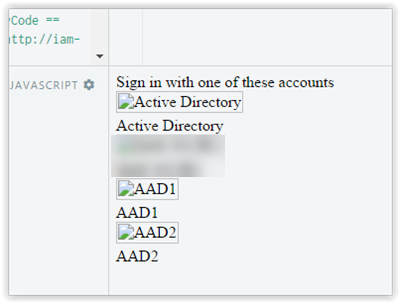 What would be the cherry on top is if I could step through and debug it. And like Bob the Builder - "Yes you can!".

commands if you want.

To hook into the debugger, add this command at the point that you want to invoke it.

The debugger will be activated: 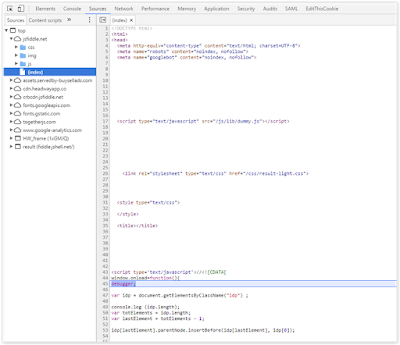 Now you can step through using the commands top right and view Local etc. 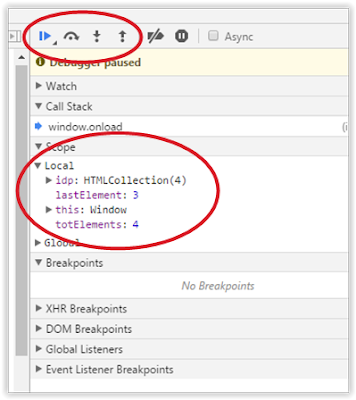 Any console output you are looking for is under the "Console" tab. 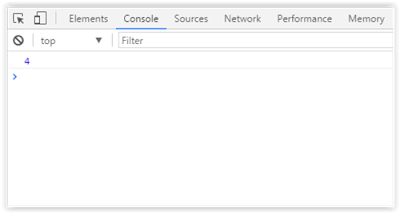 This is SO much easier.

There are PowerShell commands to change text but there is nothing to add text, links etc.

We use the js inject mechanism described here.

And we want the text in blue.

The trick is to find an element on the Update Password HTML that is not on the login page.


The screens are then: 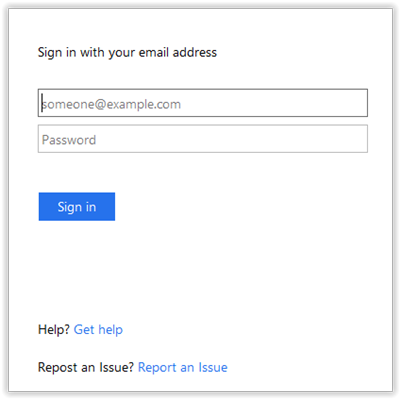 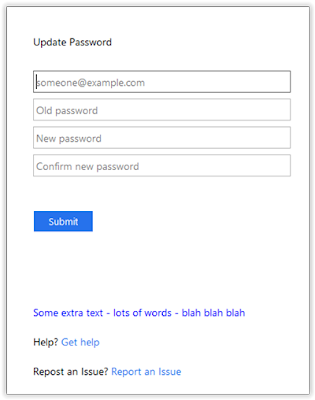 Note that the "Cancel" button in the "Update Password" screen has been removed as per this.

ADFS : Remove the "Cancel" button from the Update Password screen

I don't actually get the "Cancel" button on this screen. It doesn't seem to do anything and just confuses people. 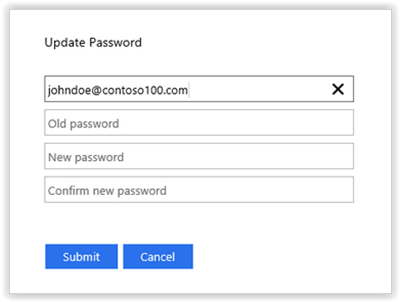 So why not remove it?

This is just another change to onload.js. (See this for how to make a new theme etc.).

Notice the user of "outerHTML" to remove the whole element.

I've posted a number of times on this topic and during my research came across a number of useful articles so I thought I would wrap them all up as a reference.

I found that most articles I came across simply regurgitate the information in the official articles. I just wonder what the point is?

The official Microsoft reference is:

Some code to allow the ADFS Cancel button on the Update Password page (Expired Password) to redirect back to the original page.

ADFS : Remove the "Cancel" button from the Update Password screen

What's interesting about this article is that the custom js is in a separate file, it's added via the additional file resources and then "injected" i.e.

You can add text and links: 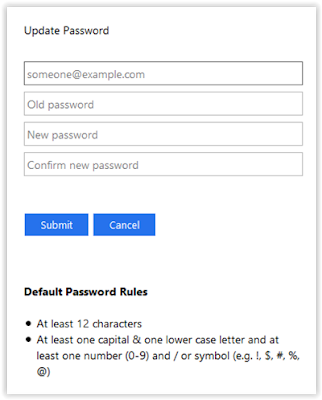 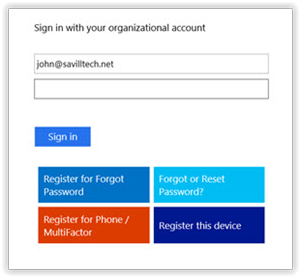 Adding buttons instead of links:

Using sAMAccountName to login rather than User Principal Name (UPN) or using DOMAIN\username.

Using SAMAccountName to Login to ADFS in Windows Server 2012R2/2016 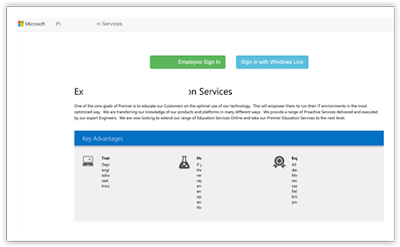 Hiding others customers when using Office 365.

You can add text and links:

Hiding some of the RP in the IDPInitiated scenario:

How to Hide a Relying Party from AD FS 3.0

How do I customize the ADFS 3.0 logout page to force sign out?

Changing the "Active Directory" name in ADFS 4.0 to something more appropriate.

At the bottom of that article, there is some JavaScript to show how to move this entry (the local AD) to the top. Unfortunately, it is hard-coded for a certain number of IDP and needs to be more dynamic.

This is a more dynamic solution.

ADFS : Moving the "Active Directory" IDP entry to the top of the list

If you use the -OrganizationalAccountSuffix to associate a RP with an IDP, you get something like: 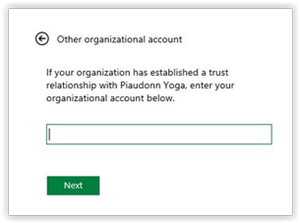 If you want to skip this, have a read of:

-OrganizationalAccountSuffix is out-of-the-box for ADFS 4.0.

If you want to change the thumbnail images:

Customizing the IDP images in the Home Realm Discovery page 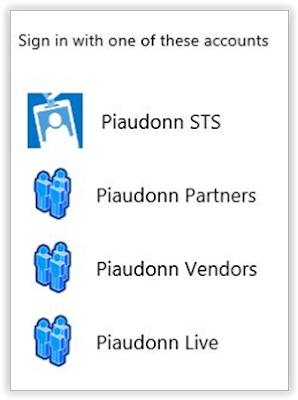 You can add extra text to the pages: 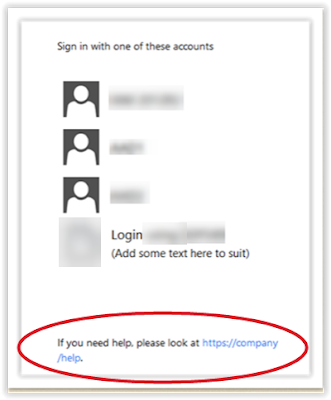 If you are wondering about how to get the small text inside the "button", refer:

"Back in December 2017 the User Experience (UX) for Azure AD login changed to a centered (or centred, depending upon where in the world you speak English) login page with pagination. Pagination is where you enter the username on one screen and the password on the next. This was covered in new Azure Active Directory centered sign-in experience and recently in early April 2018 Microsoft announced changes to the UX to include the removal of all the right-aligned pages (for example the MFA screens and password reset)."

The standard commands to change the default theme are in the official links at the top.

Note that you can change any collateral in the theme.

"Unless you have saved all the PowerShell cmdLet you typed to create your custom theme in your pre-production environment, it is quite challenging to recreate the exact same webtheme on your production servers. It is easy to export a configuration with the Export-WebTheme cmdLet. But it does not give you the ability to re-import what you just exported. I wrote the following script to help with that:"

And you can debug the onload.js. Bargain!

Want pop-ups with that?

ADFS : Pop-ups on the HRD / login and change password screens


I'll keep adding to this page as new examples come to light.

There are a number of posts out there around this, mainly around changing the text of an element in onload.js e.g.

where that element already has a text element and you are simply overwriting it.

What I didn't realise is that you can do this with any element, even those that don't currently have text.

I needed to add some text to the HRD screen. The only text there is the copyright message at the bottom.


There's an element there called "footerPlaceholder". It has no text. 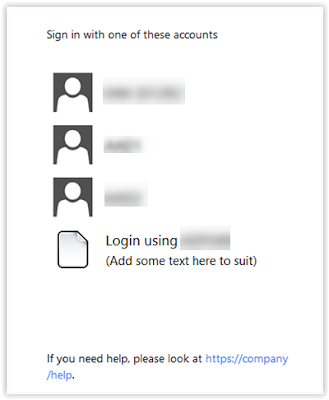 This then flows into the login page: 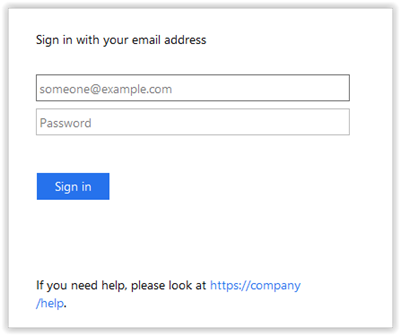 If you don't want that, you need to filter by:

//Check if we are in the HRD page
if ( document.getElementById("hrdArea") ) {

ADFS : Beware copying over claims rules when they contain groups

I copy claims rules over all the time as per my earlier post.

So I did this and it wouldn't work.

Much head scratching and then I realised that  one of the claims rules was a "Send Group Membership as a Claim".

If you look at this type of rule, it looks like:

Notice that it has a SID and (of course) this SID is relevant to that instance of AD only.

So, beware, you can't just copy these types of rules over!

As per that article, the IDP name is coded in the JavaScript as:

What you can do is add a line of text beneath it:

Because of the HTML there are only a limited amount of characters you can add but it is a neat way to add a better description.

If you are wondering how to change the icon (I just used a random one), refer: 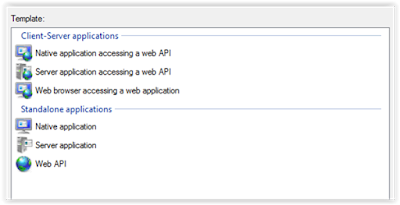 These are the OpenID Connect / OAuth options that you have.
and combinations of the above.

But nowhere in the wizard can you set the token timeout.

Building on this we can do:

And here we see a token lifetime!

But note the option only applies to web API.

To set this use: