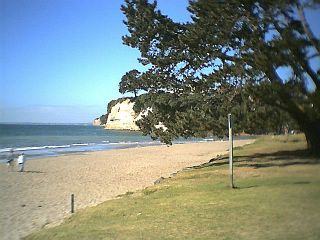 Down the road: Brown's Bay Beach, North Shore, Auckland
Posted by nzpcmad at 9.4.05 No comments: 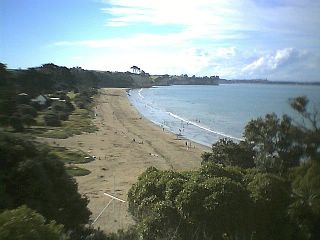 Room with a view - Long Bay, North Shore,Auckland
Posted by nzpcmad at 9.4.05 No comments:

CF : Updating the application on the device

(Compact Framework)
Posted by nzpcmad at 7.4.05 No comments:

There are some really useful links here:

(Compact Framework)
Posted by nzpcmad at 7.4.05 No comments:

It's often very useful to run the VS tools outside of Visual Studio.

To do this, run the Visual Studio Command Line which sets up the command prompt with the correct PATH environment.

e.g. you could use this to run

which will display the exported function names.

Ever wanted to log the actual content of the SOAP messages arising out of Web Services on your device.

You can do this with SOAP Trace Extensions.

My particular problem was with Windows CE.

This behavior can be seen using the CE emulator running under Visual Studio 2003.

InitializeComponent() and the onLoad event both have the

Using the RTM version of the CF (1.0.2268.0) navigating between the two forms using the buttons causes the two forms to be always maximized.

Installing SP2 (1.0.3316.0) on the emulator and then running the same application causes the forms to be minimized on the taskbar while navigating between them and they have to be manually maximized.

The full example I wrote to illustrate this can be found here:

After posting to the group, emails to Microsoft, formally logging the bug with Microsoft I got nowhere.

Then Alex Feiman suggested a workaround to this.

As Alex explained: "The reason the forms get minimized is because at some point you do not have a visible form and the runtime thinks you want the app hidden".

stops the next form from minimising under SP2. It was never an issue with RTM.

Each form has always had the

(Compact Framework)
Posted by nzpcmad at 1.4.05 No comments: